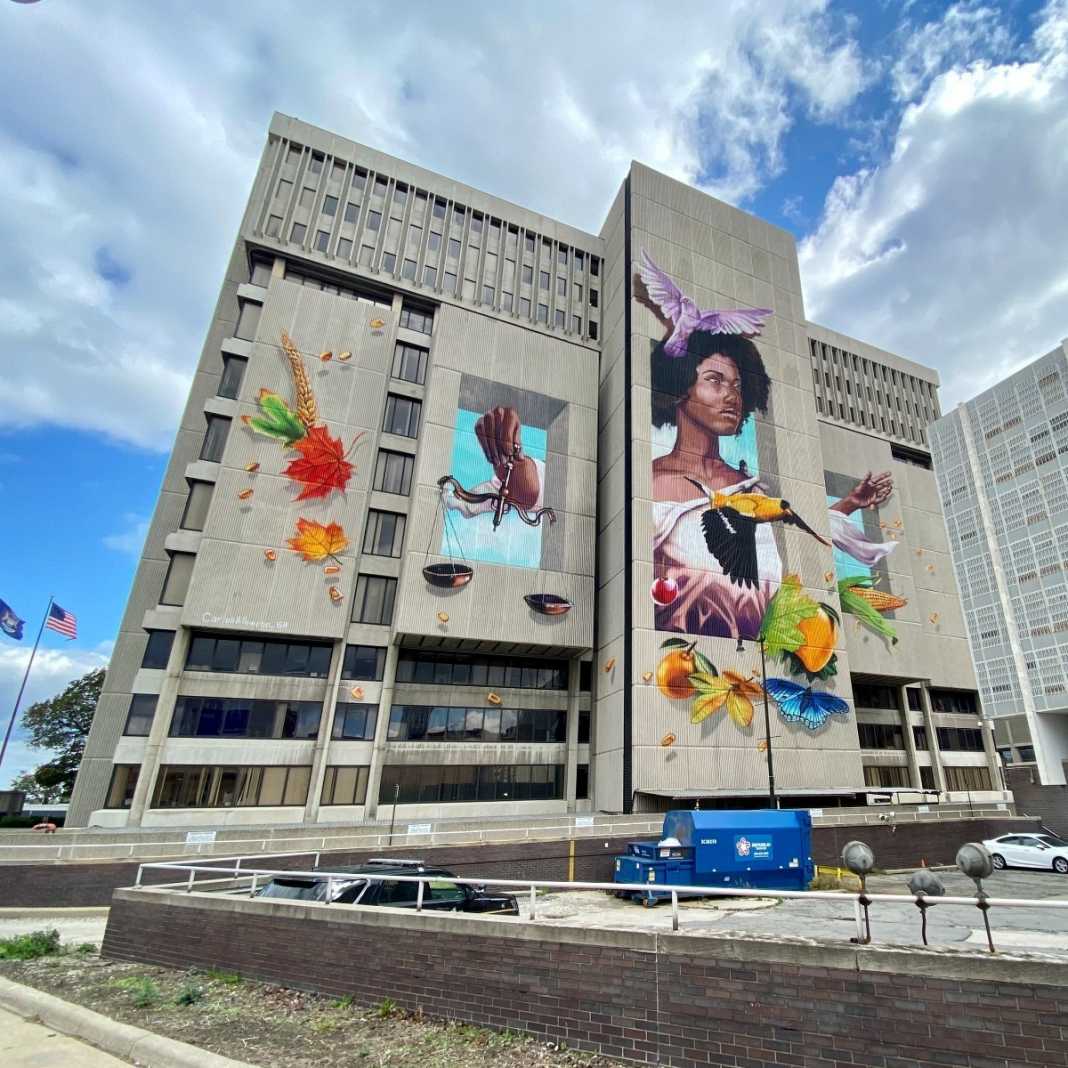 Last week, the Frank Murphy Hall of Justice unveiled yet another first for the city of Detroit and for the nation–a trend that everyone likes to see picking up steam. A 3-Dimensional mural, the largest of its kind in the country to date, now takes up residence on the 19-story wall of the building to call attention to food insecurity and hunger faced by the most vulnerable in the community.

The 3-D mural is the work of internationally renowned artist Carlos Alberto GH, who specializes in hyper-realism and making his work jump off the page–or in this case, a building. With support from the World Food Program USA, Street Art for Mankind and the Kellogg Co., as well as local support from Wayne County, the City of Detroit and the Detroit Marriott. It depicts a young Black girl in sharp relief and shadow, surrounded by tropical birds, fruit, and harvest and fall-time plants and crops. In her right hand, she holds a set of scales. From her right, she scatters seeds to the streets below.

“Hunger and food insecurity issues have only grown during this pandemic, especially among those in the African American community,” said Wayne County Commission Chair Alisha Bell. “While we as a county and as individual commissioners have joined with local businesses distributing food to those in need, the issue existed even before the pandemic took hold and this major artwork reminds us all that more must be done to fight hunger.”

Rochelle Riley, the City’s Director of Arts and Culture, says that the mural is just another reminder that Detroit is and always will be a mecca for social justice art.

“We have one of the largest creative arts communities in the country,” says Riley. “But we also draw the best here when there is a need for art to give voice to those who need it.”

The mural is among six commissioned throughout the U.S. in support of the United Nations World Food Programme, which has established Zero Hunger as a sustainable development goal. Other murals have been created in New Orleans, Houston and Oakland, California, with  additional murals set to be created in Washington D.C. and Battle Creek, Michigan–the headquarters of Kellogg’s, incidentally.

Street Art for Mankind, a non-profit organization that uses work from 80 artists

throughout the world to promote social change, created a free mobile app called “Behind the Wall” to allow individuals to view the mural, learn the story behind its creation and the artist, receive statistics on childhood hunger and learn how they can take action.

The Most Stylish, Thrifty Couple in Detroit