Spaceships. Flying jet packs. A pristine city on a hill adorned with the latest tech. AI (artificial intelligence). Dystopia. Utopia. Science fiction has used these tropes or a variation on these themes since its inception. Concepts going all the way back to Mary Shelley’s Frankenstein – the book and its subsequent movie adaptation – are often thrown in the horror genre column, yet many scholars agree that it is actually a work of science fiction and is concerned with perhaps the most potent philosophical theme within the genre: namely, the other. Indeed, black folk personified the alien, the outcast, a race to be feared.

Science fiction – a term attributed to Hugo Gernsback in the 1920s – was designed to not only entertain but to play within the possibilities of speculation about the future, always with a foundational foothold in the present. This is the key: Science fiction – whether it delves into alternate history, time travel or the distant future – reflects the present. But unfortunately the genre had rarely included black people. For many, the appearance of Star Trek’s Uhura (played by Nichelle Nichols) on the bridge of the Enterprise was a shock to the black senses, given that the census has always played its hand against African-Americans in space, and by extension, a future encompassing them.

Fast forward through the 1950s and 1960s, past the ’70s and ’80s, on to cultural critic Mark Dery’s coining of the phrase Afrofuturism in the 1993 essay, “Black to the Future.” The subculture had been evolving over time and it didn’t matter that it had come from a white man; blacks embraced it. From Sun Ra’s “Space is the Place” to Parliament Funkadelic’s “electric” Mothership to Janelle Monáe’s android aesthetic, Solange’s sun dial headdress, Black Panther’s technologically-driven Wakanda, the Afrofuturist vision has been moving from the outskirts of abstraction to the comforts of the mainstream.

Pyramids. Sun Dials. Books by Octavia Butler and Samuel Delany. Outrageous fashion statements straight from the very fabric of warped time and space. One might argue that Afrofuturism is the ultimate Rorschach test – everyone sees something different, yet share the same launch point. We’ve gathered some of Detroit’s most influential Afrofuturists to explain what they see in Afrofuturism, its influence, cultural significance – generational, ancestral sprawl – and its relation to the blackest city in the nation. For them, Afrofuturism is more than science fiction, it’s a fact of black life.

“For me, as an Afrofuturist I’m always wondering where are we going to be in the foreseeable future. For that reason, I want black bodies to be liberated and remain liberated. For an 85 percent black city – a majority of color – that has experienced economic injustice for generations, all of this matters.”

“It hit me similar to the phraseology of hip-hop. Hip means to know, hop means the movement. Hip-hop put together means to ‘know the movement.’ For me, Afrofuturism is simply a term used to describe the ancestral culture and practice of defining one’s self based on ancestral identity in their present moment. It’s describing cats being ancestral in the present: I exist in the present based on the past and directly contribute to the future.”

“Afrofuturism isn’t solely ‘black folks doing black things, whether there’s tech involved or not.’ Is Afrofuturism utopian? Not necessarily. It could be. But at the very least it’s neighborly. ‘Afrofuturism’ is most valuable in question form, not canonized answer. I’ll quote this gem from friend and writer Asadullah Saed forever: ‘I love how science fiction interrogates tradition. If your future doesn’t interrogate the past, your future is useless.'”

“Sun Ra was my first introduction to Afrofuturism. Maybe 18 years ago. What it is to me is a way of fusing African tradition with where we currently are situated.”

“My shorthand is that it’s creative work from black people that claims a future for black people. It includes fiction, and fashion, music, technology, architecture, art, textiles, poetry … even political frameworks.”

“It’s a kind of conversation and a way of being that is beyond … I feel like it’s one of the few playgrounds where you don’t have to explain about the freedom of black bodies.”

“We think of space … we think of tech, but for me (Afrofuturism) is the reality we have yet to see for ourselves, right now at this moment. It goes beyond space and aesthetic. What have we only imagined for ourselves right now that impacts our daily lives?”

“My responsibility is to teach people. In order to get gas, in order to eat, I’m literally supporting a system that I’m against. We have the opportunity to work beyond that, outside of that … and create our own ecosystem that does not produce harm. That is the true liberation. Creating an alternative government system – all it does at the end of the day is bring more power to the individual.”

“I feel like the biggest thing is people have forgotten who they are and really getting rid of this idea of being inferior. Once you know who you are, it’s a floodgate of information; Afrofuturism as a muse.”

“So much of my work is shaping a future in which black people not just survive, but love with ease, pleasure and joy. I’m thinking a lot more on pleasure as an act of resistance and a measure of freedom, a rejection of narratives of oppression. I want us to imagine a concrete, vibrant and pleasurable black future!”

“At its simplest, imagination provides energy. Reminds us we are gods. Again, look at the response to Black Panther. Folks lost their righteous minds. Mine rolled under the sofa after it fell out my head. Art and representation create reality. There’s no way around that. They are powerful tools of control no matter how you cut it. I don’t want a future that tells me I’m still the supporting player. If art shows us how someone wants us to see ourselves, I’ll keep writing my quirky books about black heroes saving the world one last damn time.”

“What I think should come next is every black African filmmaker make African culture a part of every film like the dominant culture does in all of its creations; we need African images to stimulate ancestral codes latent in us.”

“When Janelle Monáe dropped Tightrope in 2008, she instantly became my hero. The genre has achieved so much acceptance over the last decade, and musical culture is largely the foundation of that.”

“The beautiful thing about Afrofuturism is (that) your imagination can take you anywhere. It can be an act, it can be an organization, it can be a podcast, as long as it ties back into uplifting all aspects of black life.”

“When I was running for mayor, I proposed that Detroit create its own cryptocurrency. We could create a universal basic income so that we can tackle our poverty issue. I do not believe a human should live without the basic resources – food, shelter, clean water, fresh air, but capitalism tells us you’re supposed to pay for these things. You can never own land, you can never own air. Ancestrally, we’ve been told this many times. It (capitalism) excludes people, it creates inequities. I’m just staying on that path and working more and more to creating these alternative systems that I’m hoping will strengthen and provide prosperity for the black body.”

“Drive around this city. You’ll see art as an act of defiance. You’ll see art as beauty. Art made from scraps that reflect people moving toward better futures. The Charles Wright Museum will teach you about Afrofuturism because one of the tenets of Afrofuturistic thought is that the past and the future intertwine to become the present. Visit the Oakland Avenue Urban Farm to see the future as collective effort right before your eyes. In this city it’s practically impossible not to learn about Afrofuturism.”

“Detroit is an expression of collective Afrofuturism already – many black people sowed this place through the concrete and ‘made a way out of no way,’ committed to each other more than any industry … I think the gardens, the art, the movement work, the technological advances like at Incite Focus. It’s an exciting time, even under all the gentrification.”

“People come to Detroit for some kind of transformation in their life. Afrofuturism is definitely a platform where all people can mingle – it’s a platform that is accessible for everyone. I’m really hopeful about it.”

“Detroit has already been home to Afrofuturist ideas. We had to build and create in order to sustain life here. We’ve always been that ever since Detroit was that last stop on the Underground Railroad. We’ve been building the future since black folk came to this land and looked at it as a focal point for hope. We are already Afrofuturists. The high rate of murder of trans women, water shutoffs, food insecurity … we don’t have a choice but to co-create with each other to build the world we want to see.”

“We should care about Afrofuturism as a conversation because in it, we are giving ourselves the chance to question the identities that were given to us, as well as the place in society that was projected on us. For those people who are looking for a way to have that conversation with themselves – we’ve got Afrofuturism.” 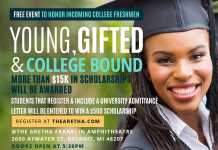 Credit Social Technologies with Keeping Us Hanging on During Quarantine